Fear is among the most potent of human emotions, capable of manipulating not only our thoughts but our bodies. A rush of adrenaline causes sweat on the brow. Trembling limbs. A quiver in the voice. In extreme cases, an internal crisis can lead to unexplained physical symptoms.

This condition is known as Conversion Disorder. 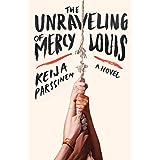 Keija Parssinen’s The Unraveling of Mercy Louis explores this phenomenon, tracing the physical deterioration of a group of teenage girls spurred on by psychological stressors in their small town.

Set in Southeast Texas during the final six months of the 20th century, Parssinen’s novel opens with a grim discovery in the dumpster outside a local market. Already on edge after a refinery disaster left their town blighted, the people of Port Sabine leap into action pledging to locate and prosecute the party responsible for this crime.

What follows is a veritable witch hunt where girls are found guilty simply by virtue of their being female. Otherwise promising young women are goaded into purity ceremonies, shamed publicly when evidence of their sexuality is uncovered.

In Parssinen’s title, I recognized the allusion to the Salem witch trials and Arthur Miller’s play,   The Crucible. Other comparisons followed, not only in the characters (Annie Putnam; Marilee Warren; Abby Williams; Pastor Parris; Lucille Cloud, like Tituba, an outcast who serves as scapegoat) but also in the novel’s dark themes:

The summer is a character itself; hot and reckless. Fertile. Fearsome.

Almost everyone in Port Sabine is terrified by their desires.

– Evelia Boudreaux, Mercy’s grandmother, longs for her reunion with God on the eve of Y2K.

– Illa Stark longs for connection, both with Mercy and her own maimed mother.

When her soul’s salvation is pitted against the fitful urges of her body, her unraveling is, perhaps, inevitable.

Parssinen’s language is rich with imagery, by turns elegant and colloquial; timeless yet contemporary. Mercy’s story remains fraught with urgency, revealing both the ugliness and the beauty of which the modern world is capable.

I found both pessimism here and hope. We are, none of us, immune to the conflicts given life in Keija Parssinen’s book.

Its official release is March 10th, but you can preorder  a copy here and purchase Keija’s first novel, The Ruins of Us, here.

Leave a comment below sharing the title of a book you are reading and one of you will be picked to receive a free copy of The Unraveling of Mercy Louis.

For more opportunities to win, check out Greta’s review at gfunkified and follow the blog tour that continues tomorrow at Rita Aren’s Surrender Dorothy.

“In earth science, we learned that the sky isn’t actually blue, its color a trick of light scattering as it passes through the atmosphere. Sometimes science ruins things. I try to forget what I learn, but it’s impossible. Once a mystery is gone, it’s gone.”

*I received an advance copy of The Unraveling of Mercy Louis in exchange for an honest review. The opinions here are mine alone.

21 thoughts on “The Unraveling of Mercy Louis: Book Review and Giveaway”